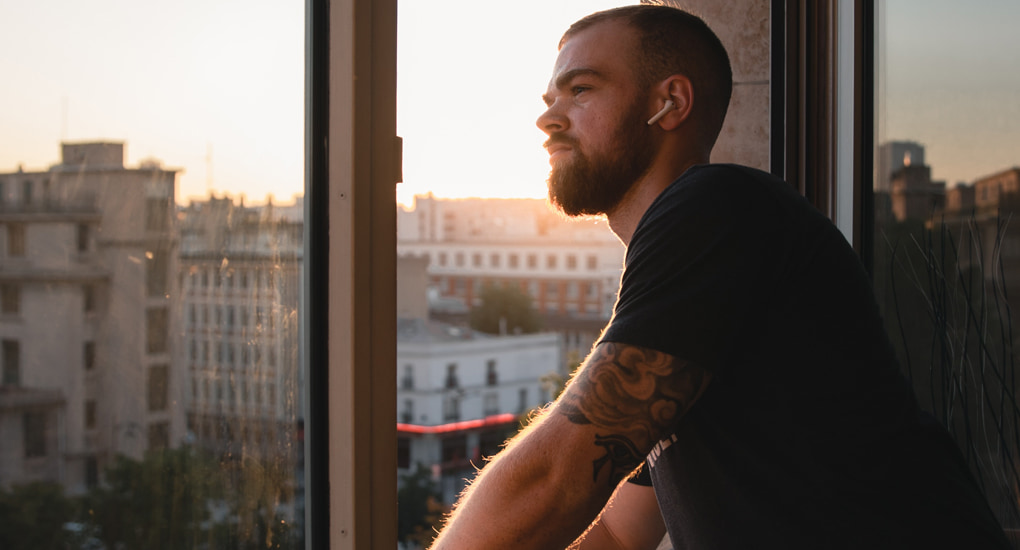 Apple is king when it comes to next-generation technology. Their innovation and passion for design shine through their sleek invention – the Apple AirPods. Customers love them too. They’re so popular that you can hardly go two city blocks without coming across someone wearing them!

It’s been the “in-thing” since its release in late 2016 with a whopping 16 million headsets sold in 2017, up from 14 million in the previous year. However, the controversy surrounding them has been whether or not they’re safe to use and if users should revert to using traditional headphones.

Many users not only wear them during the day but even go as far as sleeping with them! This article takes an in-depth look at whether it is safe to sleep with AirPods and the risks associated with them.

What Are AirPods and How Do They Work?

AirPods are wireless headphones from Apple, which look a lot like the in-ear headphones made for older devices, except they don’t have unsightly cables running from them. Inside these small headphones are special miniature-sized wireless chips, accelerometers, optical sensors, microphones, and in-built batteries.

They use Bluetooth to wirelessly connect to your iPhone or other Apple devices, giving you high-quality sound as well as the freedom to move about when you’re on a call with someone. The fact that they are chargeable and have Bluetooth capability means that they emit both EMF and RF radiation, respectively.

So, as you can imagine, having these small devices in your ear right next to your brain for long periods is bound to have some lasting long-term side effects. Sleeping with them in your ear is, therefore, not such a great idea if you are concerned about your health and wellbeing.

How Do AirPods Radiate EMF?

EMFs come in two forms: Ionizing and non-ionizing radiation. Ionizing radiation has enough energy to dislodge an electron from an atom, whereas non-ionizing does not. It does, however, lead to oxidative stress by causing a pro-oxidant (free radicals) and antioxidant imbalance in the body.

When there’s a higher concentration of free radicals than there are antioxidants to stabilize them, they damage to otherwise healthy cells. This damage involves DNA fragmentation, which is the onset of carcinogenesis.

Since AirPods have electrical components that promote the flow of electric current, it means that these tiny gadgets inevitably emit EMF. The same logic applies to their Bluetooth capability. Bluetooth is a form of RF radiation which emanates from these devices. Many concerns have arisen as a result.

The health and safety concerns over AirPods stem from the fact that they emit EMF radiation, which could have adverse effects on human health. Add to the fact that it is always in direct contact with your skin, and so close to the brain is alarming, to say the least. Here’s what the scientific community has to say about not taking out your AirPods when you go to sleep.

Many believe that non-ionizing radiation is harmless simply because it is not applied at non-thermal intensities. This, however, couldn’t be further from the truth.

Several studies (just a couple here and here) have questioned the mainstream impression that non-ionizing radiation is harmless. Surely, it’s less damaging than the harmful health effects of ionizing radiation but that doesn’t make the persistent exposure to low levels of radiation ideal.

Further, the effects of EMFs on the brains of rats have been widely studied and reveal a positive correlation between brain cell impairment and radiofrequency (RF) exposure even at low intensities.

Several parts of their brains were affected, with the most notable being the hippocampus, cortex, and basal ganglia.

In a study done to investigate the relationship between EMF exposure and protein expression, it was found that human skin tissue does indeed respond to radiation.

Scientists found that the expression of the protein in the endothelial cells was altered significantly when skin cells from both exposed and non-exposed areas of 10 female volunteers were collected, and their respective proteins extracted and exposed to RF radiation. Two out of the cumulative 580 proteins analyzed were altered.

One of the major concerns about non-ionizing EMFs like those emitted by AirPods is that it induces carcinogenesis. It’s no secret that the majority of cancers are induced by damage to a cell’s DNA and chromosomal structure. This, in turn, alters cellular function and in some cases, causes cell death altogether.

Some of the damage usually manifests as single or double-strand DNA breakage and in other instances, crosslinks — a 2009 study on EMF and DNA damage details these findings.

A few years ago, the World Health Organization (WHO) classified EMF radiation as being a possible carcinogen. This came about after numerous studies revealed the prevalence of glioma – a cancerous brain tumor – and acoustic neuroma, which is a non-cancerous growth that develops on the vestibulocochlear nerve, among cell phone users.

The vestibulocochlear nerve connects the brain and the inner ear. These diseases were the result of long term cell phone usage. So, leaving your AirPods in, all night, puts you at a higher risk for developing these diseases.

Are AirPods Safe: Physics vs. Biology

If you ask the same question to both a physicist and a biologist, you’re likely to get two different responses. The physicist would tell you that sleeping with AirPods is largely harmless since the EMF they emit is of low frequency, and the RF signals are non-thermal; unless, of course, they begin to exhibit thermal properties that would be intense enough to cause tissue and molecular damage.

However, if you pose the same question to a biologist, they would look at it from a different standpoint. According to them, an element that can make human cells react even at low levels shouldn’t be brushed off. That is exactly what EMFs from AirPods do.

It may seem harmless, but the fact remains, it is non-ionizing radiation and, as such, can alter cellular function. Here are some effects of low-intensity EMF on the human body.

From the above list, it is evident that from a biologist’s point of view, any device that emits an element capable of causing the aforementioned reactions in the body is something you need to be wary of. It doesn’t matter what any physicist tells you.

If You Must Sleep with Your AirPods, Shield Yourself

If you are one of those people that need ASMR soundtracks to get into a state of complete relaxation before you can fall asleep, there’s some hope for you. You might still be able to sleep with your AirPods in. But only if you take the necessary precautions to protect yourself from the radiation that is emitted by these and other gadgets you have in your home.

The idea behind these techniques is to reduce the overall amount of ambient EMF. That way, if the only radiation you’re exposed to is coming from your AirPods while you sleep at night, then you don’t have to worry about all the other long term effects that could come about as a result.

Without further ado, here are some of the ways through which you can reduce the levels of ambient EMF to make it okay to sleep with AirPods (if you must!).

Well, ideally, the room you sleep in (and the entire house too!) should be clean. It not only adds to your mental wellbeing to help you sleep better but also promotes an EMF-free home environment. Keeping your room clean in this case refers to dirt, clutter, and unnecessary EMF radiating devices.

Dirty electricity or ambient EMF, as it is commonly called, also qualifies as “dirt.” So do a sweep of your room, take out any router, television set, laptop, smartphone, tablet, or any other electronic device you have in there that is capable of emitting EMF. If you must have some gadgets, be sure to switch them off when they’re not in use.

Your Laptop Doesn’t Need a Babysitter

Just because it’s called a laptop doesn’t mean you have to use it on your lap or your belly. It works just as well as if you used it on a table-top. You’ll be surprised by just how much RF and EMF radiation they emit.

If you have to connect to Wi-Fi to stream your favorite movie, don’t lay in bed and place it on your lap or belly to get your daily fix of online entertainment. The further away it is from you, the less the amount of harmful radiation you’ll be exposed to.

Also, remember to disable all wireless connections like Bluetooth or Wi-Fi if you’re not using them to reduce the emissions coming from the device.

There’s also a high chance that if you use your laptop in bed to stream online shows, you might end up falling asleep before you turn it off. So, if you add that to the radiation from the AirPods already in your ear, that’s just a cancerous tumor waiting to happen if you make a habit of it.

The rule of thumb is to ensure that your bed is far away from any power outlet that might be there. So, check for where the AC, socket outlet, and electrical wirings are and position your bed away from them.

While the same holds for having an EMF radiating source like AirPods inside your ear when you’re sleeping, remember, the assumption here is that you can’t do without them. Therefore, the best thing would be to keep your bed away from all the other sources.

The one thing you need to take away from this guide is that it’s not safe to sleep with AirPods or any other EMF radiating device. Using them for prolonged periods increases your risk for developing cancer alongside a host of other horrendous side effects.

The ideal scenario would be to ensure that your sleeping area is free from all devices that generate EMF energy. But if you must sleep with AirPods, take necessary precautions to shield yourself from the harmful effects of radiation. Did you know that microwaves do so much more than just cook your food? Check out our blog for 10 surprising uses of microwaves that will amaze you!

You might be interested in this article on cell phone radiation and which models emit the least (and most) radiation.

Havas M. Biological effects of non-ionizing electromagnetic energy: a critical review of the reports by the US National Research Council and the US National Institute of Environmental Health Sciences as they relate to the broad realm of EMF bioeffects. Environ Rev 2000; 8:173–253.

EducateEMF.com is a participant in the Amazon Services LLC Associates Program, an affiliate advertising program designed to provide a means for sites to earn advertising fees by advertising and linking to Amazon.com. As an Amazon Associate I earn from qualifying purchases.